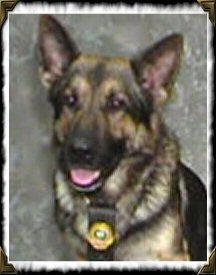 FHP K-9 Atos began his career in 1997 with Trooper Chet Tomlinson as his handler. Atos was Trooper Tomlinson’s second assigned K-9. During this time Atos was responsible for the seizures of approximately $500,000 in narcotics, $200,000 in U.S. Currency and had two tracks with apprehensions. Trooper Tomlinson was promoted to Corporal in 1999. 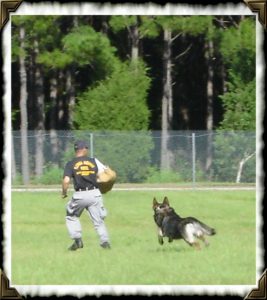 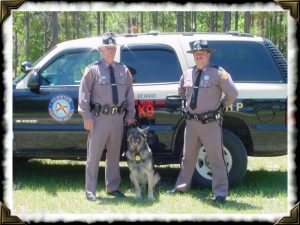 In October 1999 Atos was reassigned to Trooper Timothy O. Strickland and CIP Team B-2 with Trooper Robert C. Roux as the Felony Officer. K-9 Atos was Trooper Strickland’s third assigned K-9. During his assignment with Trooper Strickland, Atos was responsible again for the seizures of approximately $500,000 in narcotics, $150,000 in U.S. Currency and vehicles and had two apprehensions on an area search and a building search.

K-9 Atos retired in December 2006 after serving the citizens of Florida with honor and distinction for nine years. Atos lived with the Strickland family and enjoyed his retirement. He was missed by all the members of the Troop-B Criminal Interdiction Unit.

K9 Atos passed away in 2008. He will be missed as a faithful companion and friend and will be truly missed by the Strickland family.