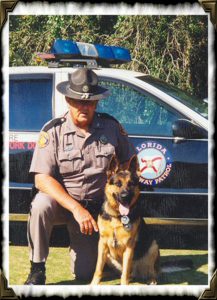 Alie began his career with the Florida Highway Patrol in August of 1996. K9 Alie and his handler Trooper Bill Bruce were assigned to the Orlando District of Troop K (Florida Turnpike). Alie worked closely with the Metro Drug Unit in Orlando, one case involved the dismantling of one of the biggest heroin dealers in the region. Over $650,000 in cash recovered and distribution ready heroin valued at $1,000,000 was seized. Many other law enforcement agencies and citizens benefited from Alie’s dedicated work as he not only hunted criminals, he provided demonstrations to school children throughout the Central Florida region. 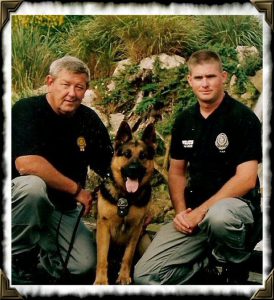 In 2002, Alie was diagnosed with prostrate cancer, and after surgery and treatment was able to return to duty. In March of 2003, Alie retired along with his handler Trooper Bruce. In 2004, the cancer had returned and in May of that year Alie passed away. To this day school children and parents ask about and remember the beloved K9 Alie.