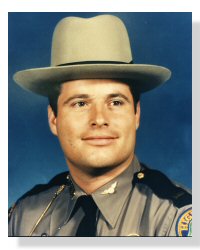 Lieutenant Thomas was struck by a passing car while walking back to his vehicle after investigating an abandoned vehicle on I-75 in Tampa.

Lt. Thomas had served the residents of Florida, with the Florida Highway Patrol, for 11 years. His career with FHP began May 1, 1978. He was in the 55th recruit class in Tallahassee, from May 1 to July 28, 1978.  He was stationed in Tampa and Tallahassee.  At the time of his death, he was 32.